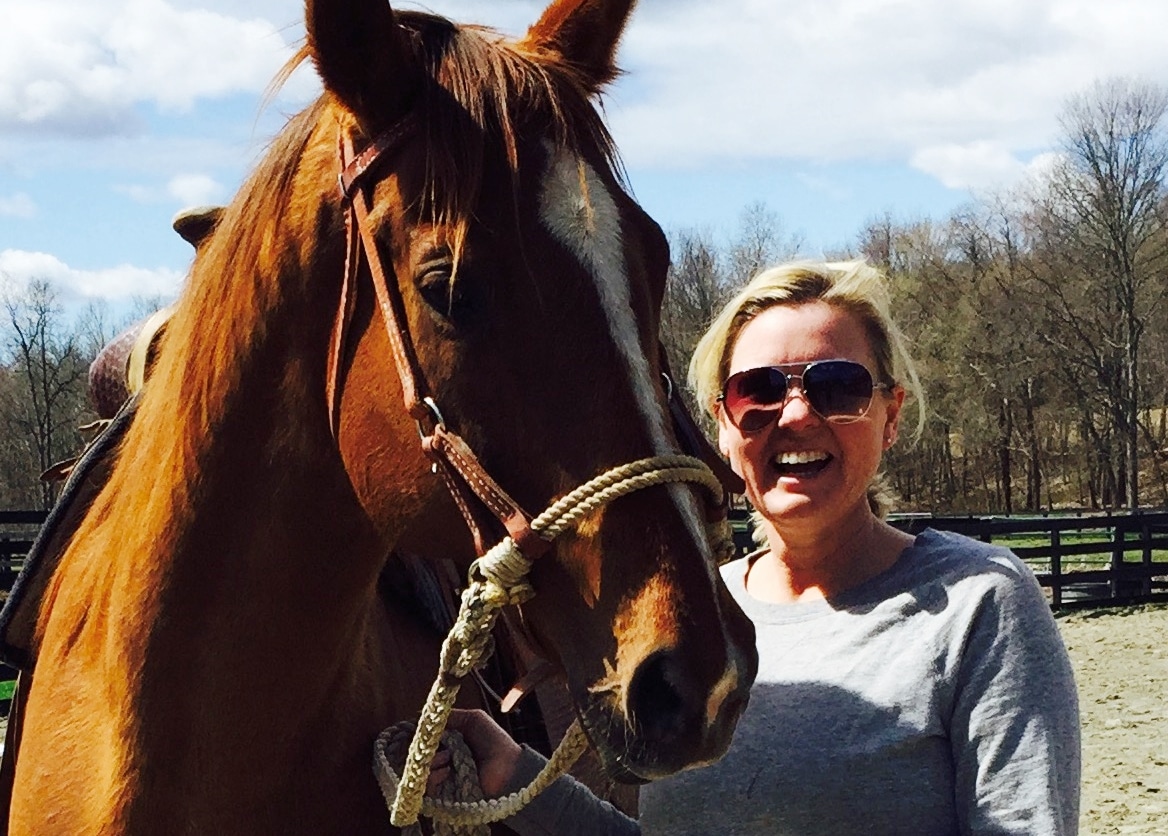 Go Forward Business and Don’t be a Jerk About It

I own a lovely young Thoroughbred. His name is Hockey and he used to be a racehorse. On the track is where he broke his leg and the owners at the time wanted to put him down to collect the insurance money. Luckily, the vet refused to do it.

So, another owner at the track agreed to pay for his surgery if the horse rescue place would rehabilitate him – which they did.

After a year of healing he was put up for adoption. I went looking for a dead broke trail horse and instead came home with Hockey. What can I say, he was just too lovely to pass up and having another project never hurt anyone, right?

Fast forward a few years – a move to New York – two horribly long winters and now it’s finally (yes finally) time to ride again. As I turned Hockey loose in the riding arena he went tearing around kicking and bucking – and I started to see my dream of spending lazy summer days coasting along on the trail vanish.

Good grief – he can really buck.

A few short rides in the arena and Hockey was no better behaved. In fact, his head tossing and naughtiness was wearing me down. We tried to go on a trail ride and I ended up walking him home. Not fun and the next day I felt like I had passed out and somebody beat me with a broom I was so sore from arguing with a 1200 lb teenager.

Enter Sarah. The barn owner and a great lady. She had somehow managed not to say anything about Hockey’s antics up until now. Frustrated, I asked her if she had any ideas on how to get him to behave. Thank God she did. We put him in the arena and started him running. The idea was to let him get all his “stuff” out so he’d settle down and pay attention. She took one end and I the other and the race was on. Eventually running and bucking turned into trotting. Then trotting turned into walking. And walking turned into paying attention and being a good boy. I hopped on him and rode around the arena and it was amazing to feel the difference. I didn’t feel like I was taking my life into my hands but rather getting on my trusty steed and enjoying a ride.

Sitting on a very sweaty Hockey I wanted to make sure I understood exactly what had just happened (plus I wanted to be sure I could do it again myself). I asked Sarah, “What exactly did we just teach him?”

She replied, “To go forward and not be a jerk about it.”

Later, as I gave Hockey a much needed bath it dawned on me  I had no idea I even needed the help until it fell into my lap. Sarah’s expert knowledge helped me to enjoy the ride and love my horse again. The gift she gave to me is the same gift I get to share with my clients every day.

As a professional business coach for women I see this in my line of work. You are going along in the business, doing the best you can, but feeling beat up every day and not getting the results you really want (and not always sure what to do about it!)

Bottom line: Your business should be moving forward – with joy and love – and not being a jerk about it. If you’re not enjoying the ride, give me a call 🙂 Jennifer Dawn has grown two multimillion dollar businesses and now mentors others to do the same. She is one of the select few nationwide Profit First and Provendus Growth Academy Certified coaches… 3 Secrets To Meet Your Goals Every Time plus business and mindset advice to reach your goals – fast.